The Devil is in the Details

A plan to resolve significant numbers of patent disputes quickly and cheaply, and another to use patents to create more U.S. jobs are the subject of the October-November Intangible Investor.

In an article, “Is the U.S. Finally Ready for a Patent Small Claims Court?,” by Robert P. Greenspoon, a Chicago patent attorney, he suggests that a court be set up to resolve less auspicious disputes quickly and for less cost.

Greenspoon has great ideas but implementing them may be another matter. The complexity of patent disputes may not lend themselves to rapid-fire adjudication. 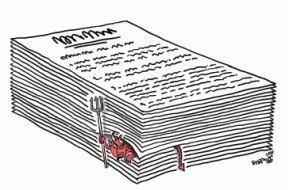 In the column I also have a go at The New York Times op-ed, “Inventing Our Way Out of Joblessness.” It was written by Paul Michel, former Chief Judge for the Court of Appeals for the Federal Circuit, Henry Nothhaft, CEO of licensing company Tessera (NASDAQ: TRSA), and (un-credited) David Kline, co-author of “Rembrandts in the Attic” (with Kevin Rivette) and “The Burning of the Ships” (with Marshall Phelps).

These authors want the federal government to provide a $19,000 incentive for each patent an SME receives to defray the cost of obtaining them. They believe that more small company patents mean more innovation, and in turn, more jobs. Messrs. Michel, Nothhaft and Kline may be on to something. They point out that the U.S. was built on small company innovation.

But they are less clear on what might be done to prevent the inevitable feeding frenzy of patent filings that is likely to ensue or the timing of payments. If it’s upon issuance, filers could be waiting for five years or more.

“Patentomics” will run in the next issue of IAM, out next week.