An uptick in recent blockchain patent publications may be an indication that the technology is quietly picking up steam, with competing big banks and tech businesses vying for leadership.

“The US Patent and Trademark Office (USPTO) published in late August 2017 nine additional patent applications related to blockchain technology that was filed by Bank of America,” reports The Coin Telegraph, an industry publication.

The patents, which relate to the carrying out and settling transactions within a payment network, were all filed on Feb. 22, 2017, so the process took only seven months. So far, BofA has filed over 30 blockchain technology-related patent applications, including some 18 in 2016. 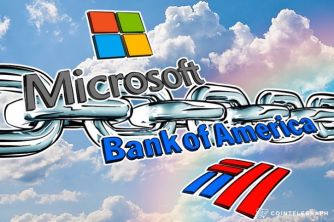 “The various patents already filed by the bank mainly focused on the whole cryptocurrency exchange and payment process. Among them were the areas of real-time conversion, transaction validation, risk detection, and online and offline storage.

“The other patents involved the use of distributed ledgers to validate the factualness of information and those who handle it, as well as a peer-to-peer payment system that operates on the blockchain.”

In September 2016, the bank partnered with Microsoft for a joint project aimed at developing and testing blockchain applications for trade finance.

“Under the deal,” reports The Coin Telegraph, “the bank will collaborate directly with Microsoft Treasury for the creation of a Blockchain system that can speed up transactions between the partners.The partners have already hinted that they are already testing how the system can facilitate the letter of credit process.”

Leading cryptocurrency startup Coinbase received in mid-August a patent related to a security system for storing and distributing private keys.

The USPTO approved and published the patent on August 15, reports Econotimes.com. Entitled “Key ceremony of a security system forming part of a host computer for cryptographic transactions’, the patent lists former Coinbase engineers James Hudson and Andrew Alness as inventors, CoinDesk reported. The patent application for “key ceremony” was submitted in 2015. The startup has filed a number of patents related to security of private keys in the past.

Also last week, the USPTO published the details of Visa’s new patent application. The biggest credit card company’s plans for the digital asset network are quite broad, reports Bitcoin Magazine. However, it might be possible that the company is planning to file a patent for the Visa B2B Connect.

The blockchain enterprise company Chain and Visa announced their new partnership in October 2016, in which the two firms decided to develop “a simple, fast and secure way to process B2B payments globally.” The Visa B2B Connect platform’s pilot is expected to launch in 2017, indicating a connection between the USPTO digital asset network patent and the new B2B solution.

Coincidence? Maybe. Publication dates cannot be controlled, but they can be managed. A spate of controversial financial transaction patents publishing in mid-August should draw more attention than they would otherwise deserve.