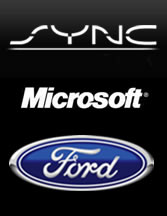 Ford Motor Company was sued twice in one week by businesses that say it is infringing their hands-free inventions, including the company’s popular SYNC voice-command technology

If it looks like we are having a flashback to the Kearns intermittent windshield wiper debacle, popularized in the 2008 movie, Flash of Genius, you may be right. However, this time there is a contemporary twist: a successful backer.

Eagle Harbor Holdings LLC and its subsidiary and exclusive licensee, MediusTech, LLC have filed a federal lawsuit against Ford Motor Company, accusing the carmaker of infringing on seven of their patents by selling Ford’s SYNC voice-command based interface that lets drivers seamlessly connect their car and mobile phone and other devices. (Eagle Harbor announcement.)

Eagle Harbor says that Ford cut off talks in 2008 after six years of discussion.

Wayne State (Michigan) University Law Prof Katherine E. White was quoted in the press as saying “Injunctions have become very difficult to get now for companies that don’t make anything. Big companies can afford to pay the damages later. What they can’t afford is to stop producing.”

The new twist: Eagle Harbor is backed by the Northwater Intellectual Property Fund, an investor in i4i, a Canadian company that was awarded $290 million in patent dispute against Microsoft that was upheld on June 10 by the United States Supreme Court.  Susman Godfrey is representing the plaintiffs in the in the matter.

Many of you will recall that Ford agreed to pay $10.2 million to Robert Kearns, who invented intermittent windshield wipers, in a highly publicized 1990 case. The matter was the subject of  “Flash of Genius” a modest critical success starring Greg Kinnear about Kearn’s painful two decade-long battle with the auto industry. Kearns later also received $30 million from Chrysler.

Also last  week, reports Patent Connections, Ford was sued by Kar Enterprises, LLC who filed a complaint for patent infringement against Ford Motor Company for alleged infringement of patents US 7,959,177 (issued 6/14/2011) and US 7,757,803 (issued 7/20/2010) regarding a “Motor vehicle operator identification and maximum speed limiter.” The lawsuit specifically identifies Ford’s MyKey® technology as the offending product.

About a year ago, Ford settled a longstanding case brought by a Florida company, Paice, that accused the company of infringing on a 1994 patent for hybrid technology. Ford agreed to license the Paice technology, but the terms were not released publicly. Paice also had sued Toyota, which agreed to license 23 patented technologies.

Popular Mechanics ranked SYNCH number four on its list of “Top 10 Most Brilliant Gadgets for 2007.”  “SYNC” is a registered trademark of Ford Motor Company. Normally Ford does not apply the brand of its suppliers to the parts or systems the suppliers manufacture for Ford. However, the vehicle interior badges for cars equipped with the SYNC system include both the SYNC and Microsoft brands.

The reporting on the SYNCH suit in The New York Times by an auto industry reporter Neil Bunkley was surprisingly solid. (As many of you well aware, when it comes to IP coverage the mainstream business press is not always fully up to speed the issues or aware of the various agenda of the participants it sources.) Matters of this nature often play out as a simple “troll” tale, a business attempting to extort money from a real innovator.

However, reporter Bunkley, who writes the Wheels blog for the The Times and has worked for The Detroit News, did a fine job resisting the simple story for what appears to be the correct one.