The President’s confusion about innovation and what needs reform will likely undermine American competitiveness.

In a recent Fireside Hangout on Google+ President Obama said that the U.S. needs to go much further on patent reform, singling out patent trolls, “who don’t actually produce anything themselves” and are “just trying to essentially leverage and hijack somebody else’s idea and see if they can extort some money out of them.”

The President’s inability to recognize who in fact is gaming the patent system, and what is to blame for tech companies’ frustrations regarding patent enforcement, will have a material impact on the American people and the economy.

Below is an excerpt from the remarks he made on Google+ last week:

Question: High tech startups are an important engine of the American economy. When I go around and talk to other entrepreneurs, what I hear is that they’re afraid that if they become successful, they’re going to be targeted by patent trolls… What are you planning to do to limit the abuse of software patents?…

Obama: A couple of years ago we began a process of patent reform. We actually passed some legislation that made progress on some of these issues. But it hasn’t captured all the problems.

The folks that you’re talking about are a classic example. They don’t actually produce anything themselves. They’re just trying to essentially leverage and hijack somebody else’s idea and see if they can extort some money out of them. Sometimes these things are challenging. Because we also want to make sure that patents are long enough, and that people’s intellectual property is protected. We’ve got to balance that with making sure that they’re not so long that innovation is reduced.

But I do think that our efforts at patent reform only went about halfway to where we need to go. What we need to do is pull together additional stakeholders and see if we can build some additional consensus on smarter patent laws.

One wonders how the myth-baiting question about trolls potentially “targeting entrepreneurs,” and Obama’s disturbingly uninformed response, got to be featured in Google+ post-State-of-the-Union Fireside Hangout? President Obama is depicted on the chat as social media-savvy, commiserating with diverse innovators, a forward-thinking and transparent chief executive.

TechCrunch, one of most virulently anti-patent publications, wasted no time in jumping on the President’s comments and making them sound even more misguided than they are: “He 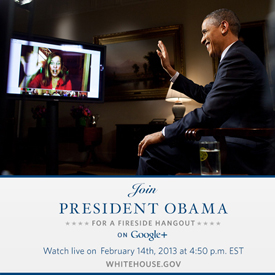 [Obama] admitted that there was a problem, and that there were some companies who were clearly not doing anything other than trying to ‘extort’ money from others. Furthermore, while he pointed to the patent reform bill that passed in 2011, he also admitted that it really only went ‘halfway’ towards reforming the patent system as far as it needed to go.” (For some reason the 47 minute chat is marked “private” on YouTube. You can view it here via Mashable.)

President Obama made no mention of the rampant invention theft by tech companies that takes place in the U.S. and abroad at a cost of billions of dollars to small and medium-sized businesses, to universities and to American jobs.

Non-practicing (patent-holding) entities (aka “trolls”), which include inventors, SMEs, are a convenient scapegoat for tech companies that lack the patents they need for freedom to sell products, or do not want to pay for access to rights to do so. The economics of invention theft are in their favor, given the poor likelihood of detection, the cost of litigation, and the uneven chances of plaintiff success.

Despite owning a lot of patents, many tech companies fear strong rights, especially in the software area, because patents are potentially disruptive to their business and future, and the possibility of a product-halting injunction is always in the air. (Financial services is another industry that would just as soon see the meaning of patent rights gutted.)

NPEs have been accused of filing more suits than operating businesses. This is true because there are there many more infringed inventions today; NPEs are more experienced generating returns on patents; and they often have access to capital to fund costly suits that others do not. In short, NPEs are better suited to monetize IP rights, and more patent holders are willing to sell to or partner with them — a partnership that strikes fear in the hearts of businesses from Silicon Valley to Seoul.

Not all Trolls are Alike

There are some NPEs who abuse the legal system by asserting questionable patents and angling for a quick settlement to make an expensive defense to go away. Such dubious IP holders are in it for the nuisance value. Most of the patent assertion that I and others are aware of involve good quality patents that are valid and significantly infringed, sometimes knowingly, some times not. The economics of litigation today are such that a quick settlement is rarely profitable given the risks and costs. If a patent holder does not have quality patents and is not eligible for significant potential damages, it almost never makes sense for a holder (or good contingent law firm) to spend its time and money.

Google+, is a social network akin to Facebook. Google has made no secret of its disdain for patents, especially software patents which have the potential to endanger its dominant position as the Internet search provider of choice. (It will be interesting to see if Google attempts to suppress the distribution of this post.)

Sadly, President Obama has emerged as a champion of the technology establishment in Silicon Valley and elsewhere, who stand to lose more from strong patents than gain. Perhaps his support represents pay-back for the support it provided for his re-election. Going up against well-funded political action committees (PACs) is no easy feat.

America’s future will suffer if patents are further weakened and legitimate patent enforcement made even more difficult than they have been over the past few years. (The SHEILD Act, for “Saving High-tech Innovators from Egregious Legal Dispute,” would have a non-practicing patent holder who fails to win a suit it brings, pay defense legal fees in an attempt to foster a double standard. NPEs exist in part because SMEs and others lack the time, experience and financial acumen to go against businesses with virtually unlimited litigation budgets.)

It’s short-sighted of the President to cede the future of American innovation and job creation to technology businesses that use their formidable resources to defend their turf rather than break new ground, or permit others to.