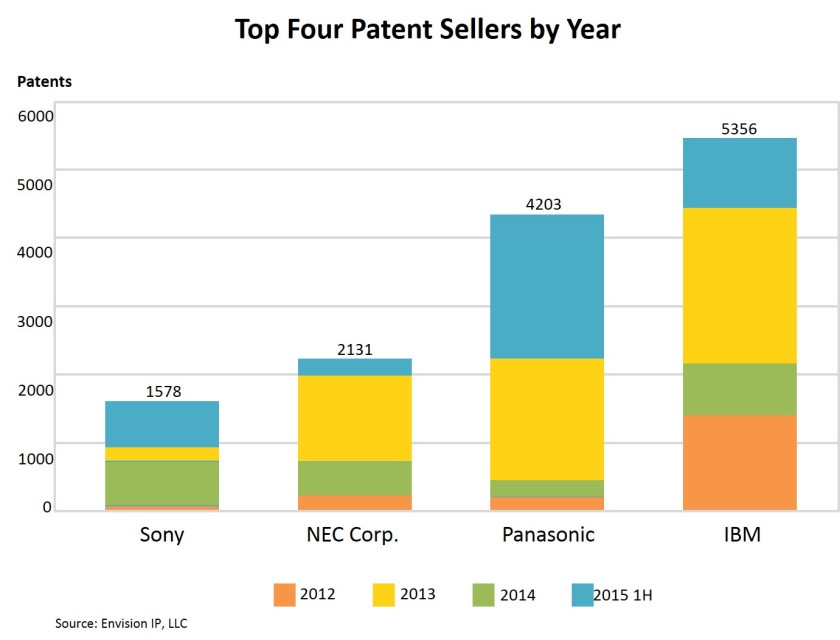 Despite dramatically lower patent valuations, some big companies, including under-performing foreign holders, have taken the number of U.S. sales to new highs.

While IBM still leads, over the past three and a half years, it has been joined by IP-conservative firms from Japan, notably Panasonic/Matsushita, NEC and Sony. All four of these companies have something in common: poor recent financial performance.

In the January IAM Magazine, the Intangible Investor looks at the latest trends in patent sales among the biggest sellers. Activity is up and emerging are new leaders, like Panasonic, which leads even IBM in U.S. sales for the first half of 2015.

Analysis conducted by Brody Berman Associates in conjunction with Envision IP, a law firm that specializes in patent research, reveals that “for the three-and-a-half year period from 2012 to early August 2015, the leading seller by far was IBM, with 5,356 patents. Buyers include Google, Facebook, Alibaba and Twitter. In 2014 alone, IBM sold 2,187 patents, the most in any year over the period by any of the 12 leading tech companies analyzed.

“Surprisingly, the number two, three and four patent sellers in the 2012-2015 period were all Japanese companies,” writes this reporter. “Panasonic/Matsushita, NEC and Sony, with 4,203, 2,131 and 1,578 respectively. This is a dramatic shift for conservative Japanese electronics giants, which rarely litigate patents to generate revenue or enable others to.”

Intellectual Venture’s 70,000 patent portfolio appears to contain no patents originally owned by Apple, Google or Qualcomm, as Envision’s findings indicate. Several patents owned by IV investors appear in its portfolio, including those of Nokia, Verizon, Microsoft and Sony. Only 268 of the 19,559 US patents owned by IV were identified as having a litigation history, representing less than 1.5% of the portfolio.

A list of IV’s 35 top sources for acquisitions can be found here.