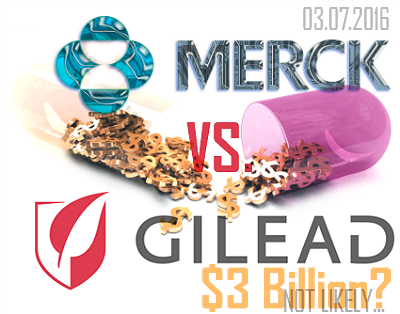 While many high-tech patents are suffering from devaluation the value of some pharmaceutical patents is soaring.

Merck & Co. won a legal victory over rival Gilead Sciences Inc. on Tuesday when a California jury upheld the validity of two patents it has been attempting to enforce. Merck believes that its upheld patents should entitle it to a portion of the $19.1 billion annual global sales of Gilead’s blockbuster hepatitis C drugs.

The patent trial began earlier this month in federal court in San Jose, Calif., where Gilead argued that it shouldn’t have to share any of the sales of its hepatitis C drugs Sovaldi and Harvoni with Merck, reports The Wall Street Journal. Last year, combined U.S. sales of the two drugs were $12.5 billion.

In 2013, Merck proposed to license its patents to Gilead in exchange for a royalty of 10% of U.S. sales of products containing Sofosbuvir, according to Gilead’s lawsuit against Merck. Gilead countered in a court document that a 10% royalty is a “prohibitive demand.”

Pharmasset Inc., the company that developed Sofosbuvir and was acquired by Gilead in 2011 for more than $11 billion.

A jury has yet to rule on past damages award for Merck and its co-owner of the patents, Ionis Pharmaceuticals Inc.  A judge will rule separately on future royalties.

Merck has demanded more than $2 billion in damages and 10% of Gilead’s sales of the products going forward.

Should the jury rule in favor of Merck and agree to a $2 billion in damages, Gilead would not have to pay this amount until multiple likely appellate options are exercised. There is also a possibility that the companies may choose to settle the dispute before the jury decides damages and the judge rules.