Most patent holders would agree that licensing patents for revenue has gone from bad to awful — from difficult less than a decade ago, to virtually impossible today.*

Determining if the courts and lawmakers have facilitated improvements or simply over-corrected for weaknesses in the patent system largely depends on whom you ask, and when.

While obvious to some, the fairness of the U.S. patent system is no longer apparent to all.

In 1996, the days of the first tech bubble, there was some uncertainty regarding patent validity. Patent licensing was not easy back then, but it was viable and still could be conducted on a business basis. Out-licenses could be negotiated without first filing suit, and significant damages awards were occasionally paid, although not as frequently has some would have us believe. The threat of an injunction that would freeze product sales was still a very potent weapon for those considering enforcement.

Things became very difficult in 2006 (high uncertainty), when injunctions became virtually impossible to obtain and NPEs, the businesses that tended to enforce the best patents most frequently, were characterized as a virulent strain of a disease that needed to be eradicated. Lost in defendants’ anger is that those who enforce valid patents may actually facilitate innovation and competition, and play a positive role in job creation.

Weighing in on whether the over-corrected patent pendulum has finally started to swing back towards the middle are Brian Hinman, Chief IP Executive at Philips, and Ashley Keller, Managing Director at Gerchen Keller Capital. In “Balancing Act,“ in the May Intangible Investor

in IAM, they speculate on what it will take to move the patent pendulum more toward the middle where it belongs.

In 2016, with the emergence of an extreme degree of uncertainty, patent licensing became virtually impossible. (Degree of uncertainty licensing can be compared to “degree of difficulty” in a gymnastics competition, although their are no bonus points for successfully enforcing an infringed patent.) Of no help was the rise of preemptive, defensive litigation (declaratory judgments), forcing many patent holders to sue first and (maybe) talk later.

Factors responsible for patents’ loss of reliability include the American Invents Act (AIA) which permitted Inter Partes Reviews (IPRs), litigation-like, post-issuance examinations of patents that invalidated many invention rights filed under previous guidelines and slow enforcement. A number of  district court, Court of Appeals for the Federal Circuit (CAFC) and United States Supreme Court cases have gone against patent holders wishing to license for revenue, including the Alice decision, which rendered many software patents and business methods invalid.

Another major set-back is Non-Practicing Entities or NPEs, also known as patent “trolls” or owners who do not commercialize or sell products but hope to generate ROI through royalty payments. All NPEs have been lumped together and have been universally demonized as “black hats” who are the primary source of all that ails the U.S. patent system and that wish to enforce questionable rights and shake down otherwise innocent companies wishing to avoid costly disputes.

However, many of the largest corporations engage similar practices themselves (aka privateers), while decrying other NPE’s.  As a result of the actions of anti-patent proponents — many large patent holders themselves — patents have become even more uncertain, and litigation longer and more costly. NPEs continue to be held responsible for the need for more anti-patent legislation, and have become a sort of obsession for some businesses and lawmakers wishing to re-frame the discussion and absolve many tech companies of serial theft.

According to Patent Progress, “a project of the Computer & Communications Industry Association (CCIA)” that endeavors to limit patents reach, there are six bills currently before Congress that still endeavor to reel-in or otherwise weaken patents and deter enforcement.

Only one piece of patent legislation, the STRONG Act, which is before the Senate, attempts to roll back some of so-called improvements introduced over the past several years, much of which in retrospect looks like an overreaction to a much smaller problem.

Fourteen bills were introduced in the 113th Congress (2013–14) alone to deal with one or more aspects of the patent troll issue. For a list of these and other bills, go here. Computer and Communications Industry Association members include Amazon, Facebook, Google, Microsoft, Red Hat and Samsung.

The diagram below, “Patent Licensing: Higher Hurdles for Protecting New Ideas,” is a graphic reminder of the progressive number and nature of impediments added since 1996 that discourage the licensing of U.S. patents. It was prepared by Brody Berman Associates for a client who has given permission for it to be shared. Key court decisions diminishing patent value and creating more uncertainty can be seen in a second slide below. 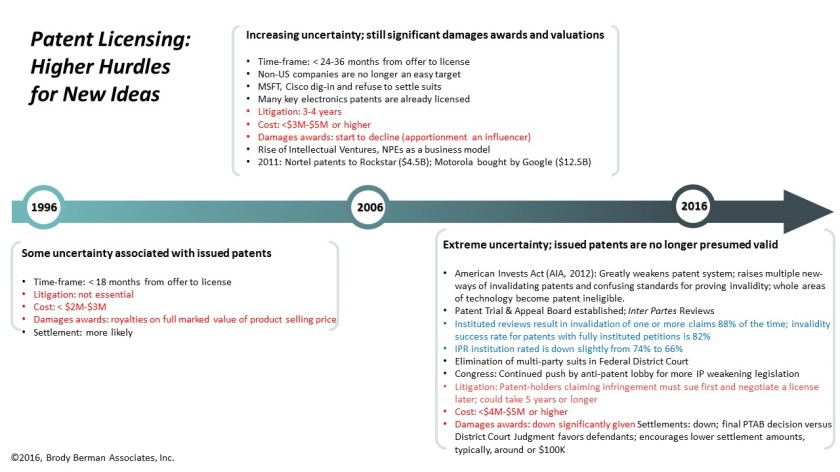 For technology companies the era of the licensing discussion is all but over. Uncertainty has never been greater, nor has hostility to owners offering an invention for license, no matter how good the patents or fair the terms. This leaves no alternative but to litigate.

“Efficient” infringement, a term we are hearing more of lately, is really a kind of risk-adjusted theft. Simply put, the deck is all but stacked against patent licensors (who are now forced to sue) because it is more economically viable today for most businesses to steal what they use than pay for it.

The courts, lawmakers and media will need to start soon if the damage that has been done to patent licensing is to be reversed. The Supreme Court decisions below speak volumes for the imbalance and how far patents have to go to bet back to the middle. It is not so much that Alice made software unpatentable as it rendered most existing business methods and many software patents invalid under the narrower guidelines that the Court established.

If proponents of fewer and lower hurdles feel the system has over-corrected and is doing damage, they had better turn up the volume. The courts, legislators and even most patent holders do not appear to be listening.

*My gratitude to Irv Rappaport who assisted in writing this article. Irv has served as the head of IP departments at Apple, National Semiconductor and Medtronic, and was a consultant to Intel responsible for suggesting the Intel Inside® campaign. He has served as an expert witness more than 70 cases and is named more than 20 U.S. patents. He also served as a USPTO patent examiner and a U.S. Army officer.