The eagerly sought bottom for publicly traded patent licensing companies may have been reached according to the data provided by an intellectual property index that tracks stock performance.

Is this merely a “dead cat” bounce from PIPCOs (public IP licensing companies) having been beaten down over many quarters? Do the results reflect the relative strength of a few large players?

Or is the sector actually rebounding from over-correction which has devalued many good patents? From this observer’s perspective, it is too soon to tell.

The S&P has dramatically outperformed the PIPX since the IP index’s inception, almost five years ago, when patent values were at a record high. Exceptions have been the second and fourth quarters of 2014 (see graph below). 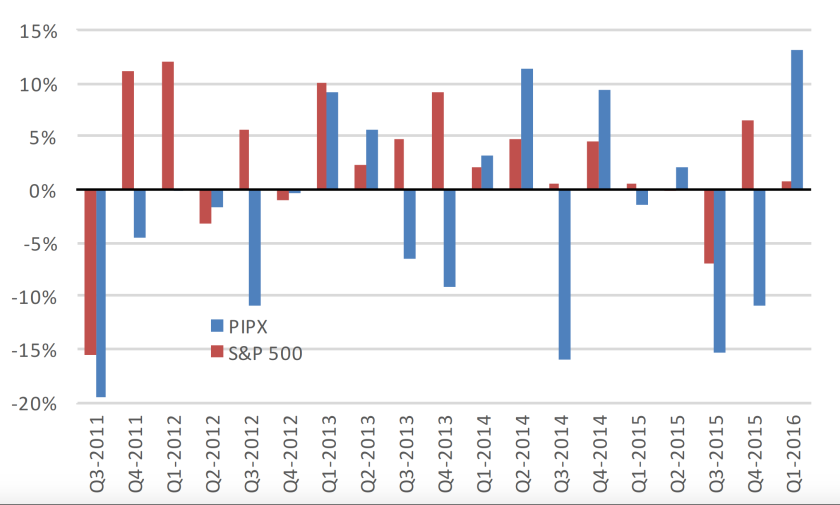 “The change in value of the component companies (below), ranging from +78.6% for Virnetx to -34.4% for Vringo,” said Dr. Kevin Klein, Vice President and General Manager of Products and Licensing at Vorago Technologies, a semiconductor company. “Parkervision (1:10) and Unwired Planet (1:12) had reverse stock splits this quarter. Vringo effected a reverse 1:10 stock split in Q4. Prices and valuations are adjusted to reflect these splits.”

The PIPX is a capitalization-weighted, price-return measure of the change in value of a segment of publicly traded companies. The performance of more highly valued companies, such as InterDigital (IDCC), Rambus (RMBS) and WiLAN (WILN) in the first quarter had the greatest positive impact on the overall index. The PIPX was brought down less strongly by the poor performance of by Acacia, Neonode, Vringo and Unwired Planet, whose market cap have shrunk.

Many of those who follow PIPCOs do so in conjunction with the IP CloseUp 30®, a real-time index of individual company performance in this sector, which also provides up-to-the minute news and updates. Readers also can quickly find market capitalization information there. The URL can be copied and placed on your home screen or home page.

In addition to a focus on intellectual property, the companies must be publicly traded and have a market capitalization greater than $100M. Since being added to the index, the market caps of many of the companies have shrunk below $100M. The index was initiated with a value of 100 on July 1, 2011.