Who is the legitimate owner of a selfie taken by a monkey, but positioned by a nature photographer? Is it the intellectual property of the animal or the photog?

A novel law suit filed recently by PETA (People for Ethical Treatment of Animals), the animal rights advocates, asserts that a macaque monkey, Naruto, should be declared the author of a selfie, not the photographer, David Slater, who set up the shot and had included it in a book. The suit demands that the monkey receive any proceeds generated by a now-famous 2011 photograph.

PETA is seeking a court order, through a suit filed in federal district court in San Francisco, to allow it to administer all proceeds from the photos for the benefit of the six-year-old Naruto, and other crested macaques living in a reserve on the Indonesian island of Sulawesi.

The photos were taken during a 2011 trip to Sulawesi by British nature photographer Slater. Through San Francisco-based self-publishing company Blurb, reports The Daily Mail, he has published a book called Wildlife Personalities that includes the ‘monkey selfie’ photos.

However, the photos have been widely distributed elsewhere by outlets, including Wikipedia, reports the 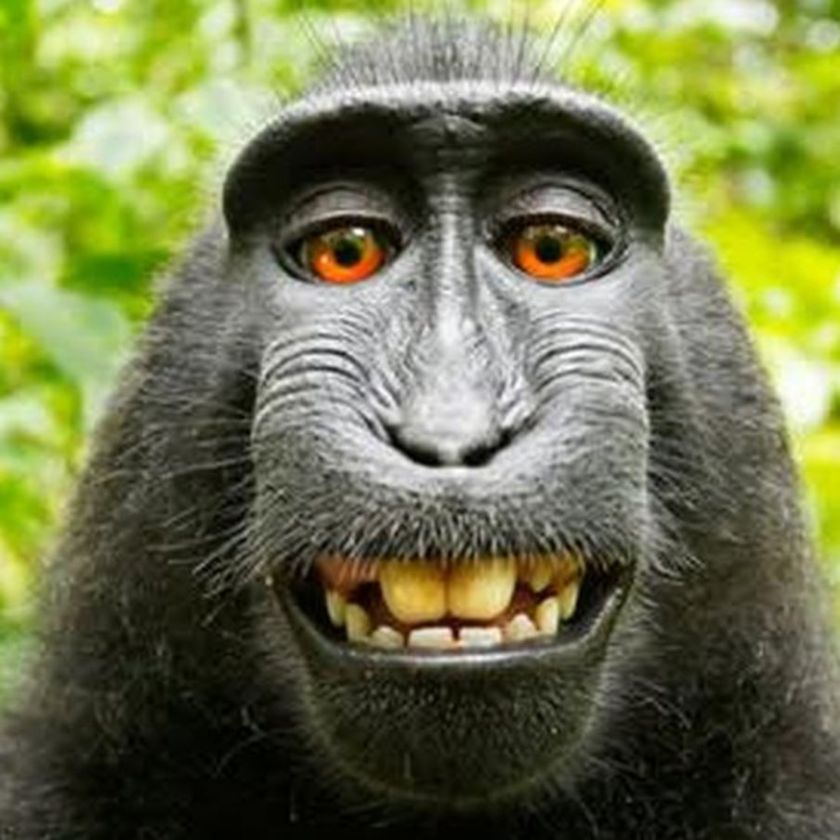 news outlet, “which contend that no one owns the copyright to the images because they were taken by an animal, not a person.”

“‘The facts are that I was the intellect behind the photos, I set the whole thing up,'” Slater said in an email. “‘A monkey only pressed a button of a camera set up on a tripod – a tripod I positioned and held throughout the shoot.’

“‘I sincerely wish my 5-year-old daughter to be able to be proud of her father and inherit my copyrights so that she can make my work into an asset and inheritance and go to university. ‘I have very little else to offer her.'”

Last year, the US Copyright Office issued an updated compendium of its policies, including a section stipulating that it would register copyrights only for works produced by human beings.

It specified that works produced by animals, whether a photo taken by a monkey or a mural painted by an elephant, would not qualify.

However, Jeffrey Kerr, a lawyer with PETA, said the copyright office policy ‘is only an opinion,’ and the US Copyright Act itself does not contain language limiting copyrights to humans.

‘The act grants copyright to authors of original works, with no limit on species,’ Kerr said. ‘Copyright law is clear: It’s not the person who owns the camera, it’s the being who took the photograph.’

If the court rules in Naruto’s favor, reports Quartz, PETA would manage the copyright of the photos on behalf of Naruto and license them for commercial use. “All royalties earned from these pictures would be specifically used for Naruto’s benefit and that of his extended family, who are being impacted by encroaching human development.” PETA is not asking for any compensation.

Animals can be the authors of valuable works of art, and there is a market for art created by animals. In fact, many zoos raise money by selling paintings created by the animals—just recently, the Lincoln Children’s Zoo in Nebraska sold 116 pieces of art in its semi-annual Animal Art event.

Survival of the Fittest

Now, if we can just treat inventors regarding their IP rights as fairly as PETA wishes to treat monkeys, their (inventors’) survival would be less in doubt.