Several surveys of global innovation have noted that the U.S. innovation edge is slipping, but until now they have not pinpointed where the U.S. share of global tech investment is going and possible reasons why.

A recent report detailing which cities today are attracting the most venture capital, Rise of the Global Startup City, states that the U.S., while still a lead player, is no longer the epicenter of all things new and  technological. Other cities are attracting a growing share of the venture pie, especially those in China.

“America’s long-held singular dominance of startup and venture capital activity is being challenged by the rapid ascent of cities in Asia, Europe, and elsewhere,” reports the study. “While the United States remains the clear global leader, the rest of the world is gaining ground at an accelerating rate.”

The reasons for the shift are complex: better access to data and computing power; local talent that cannot easily emigrate to the U.S. – or no longer wishes to  – and soaring real estate prices and salaries in established technology centers like Silicon Valley, New York and Boston.

Another reason not mentioned in the “Global Startup,” which was commissioned by the Center for American Entrepreneurship, is the inhospitable environment for U.S. IP rights, especially patents. The U.S. has fallen into an abyss where most IT patent rights are uncertain and virtually impossible to license, creating disincentives for both investors and tech companies.

At the same time, China has flaunted an increasingly plaintiff-friendly patent system that is more welcoming to innovators and foreign participation than a decade or two ago. Also, a decade or so ago, cities like London, Berlin and Delhi were barely a blip on the VC radar. Now they are serious players who want to grow. 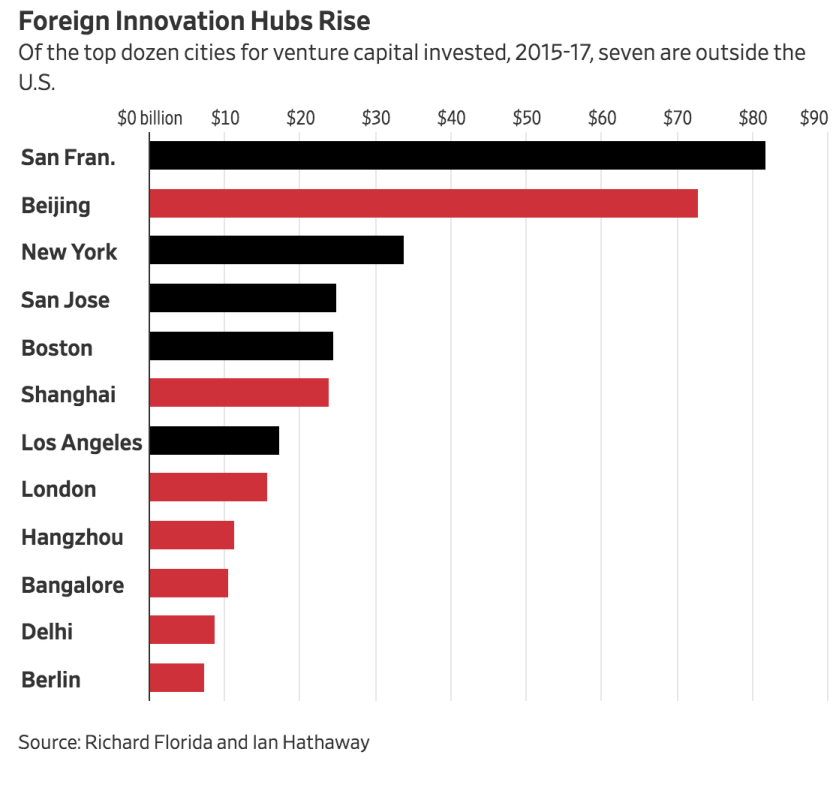 For the full report, “The Rise of the Global Startup City, go here.