For all the discussion about blockchain, the distributed ledger that is the foundation for fast, decentralized transactions, relatively few patents have been issued.

Only about 10% of those filed in the U.S. have issued, and the Chinese filings are outpacing America almost three to one in the Patent Cooperation Treaty (PCT) nations. Lack of issuance may have as much to do with when the applications were filed, as well as patent offices, especially the USPTO, which since Alice regards software-related applications very carefully. It also may have to do with reluctance to award ownership of fundamental invention rights to a few early filers.

China’s Blockchain Dominance: Can the U.S. Catchup? published on April 23 in Knowledge@Wharton, a business school blog, adds fuel to the fire.

“Some of the biggest names in the blockchain and cryptocurrency community are Chinese firms,” reports the un-bylined post. “What’s more, blockchain is also a national priority: The Chinese State Council included its development in the nation’s 13th Five-Year Plan. And last year, President Xi Jinping said China seeks to lead in innovation worldwide, citing blockchain, AI, the Internet of Things and other technologies as the driving forces.”

The Digital Chamber of Commerce has published an innovators’ guide to block chain development, with PCT patent filing data showing China ahead of all nations, with almost three times as many applications in 2017 as the U.S.  Obviously, quantity does not mean quality, especially in an area of invention art as tenuous as blockchain. The Chinese may be more generous in terms of issuance and enforcement, especially if local patent holders are there first.

The USPTO has published nearly 700 blockchain-related applications it received between January 2011 and April 30 of 2018, according to Bloomberg News. It has granted 70 patents on blockchain technology during that time, Bloomberg Law data show. 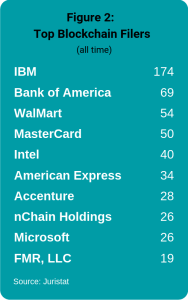 It’s unclear how many applications the patent office denied, received confidentially, or stopped processing because applicants abandoned them.

While it can take as long as three years for software-related patents to issue, they also are being issued less frequently — and Chinese companies, which are sometimes controlled by the State, have been receiving patents, too.

China currently has the largest number of blockchain patents in the world, reported IAM, having raced ahead of other  countries such as the US and Japan. That may not mean too much today. It could mean a great deal in a couple of years.

In 2017, China was the most active filer of blockchain patent applications and by 2020 the country’s blockchain market is expected to reach 10 billion yuan (€1.3 billion).

The Chinese blockchain industry can be categorized into three branches, said IAM managazine: upstream (eg, mining rig and hardware), middle stream (eg, data services), and downstream (eg, financial service, medical service, energy industry) enterprises. As of 2018, commercial use in blockchain receives the most patent applications, followed by communication use and calculation use.