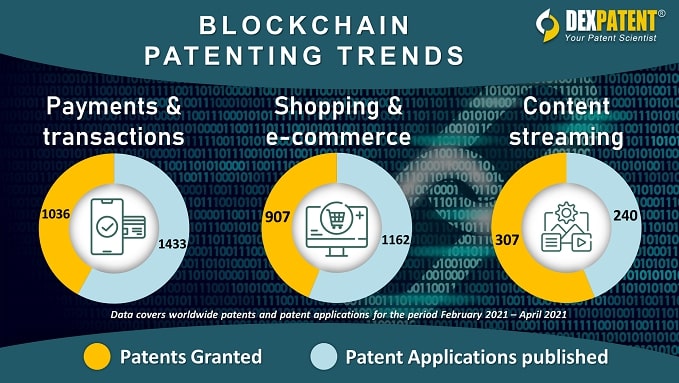 More global blockchain patents have been published and are preparing to issue in transactions and e-commerce than have been issued over the past several years.

This can be interpreted several ways, but it likely means that blockchain technology developments in key areas still have a long way to go from being considered mature technologically.

“The blockchain space is experiencing a frenzy of patent activity,” reports law firm Sheppard Mullin. “The data shows that there are 3-4 times as many published applications as there are issued patents for these concepts. This trend strongly suggests that the number of blockchain-related patents will surge in the next couple of years.”

For the class of patents covered by payments and transactions, there are 1,036 issued patents in the period from February to April 2021, according to DexPatent. However, there were much more than that amount in the queue as indicated by 1,433 published applications.

Blockchain technology is being increasingly used in the banking, financial services and insurance (BFSI) segment for financial transactions and cross-border payments, according to HTF Market Intelligence.

In the Banking and financial sector, it is utilized to secure payments, maintain customer identities, settle cross-border payments, etc. The global Blockchain market is expected to grow at a CAGR of 42.8% 2021-2026 leading to global revenue of USD 19.9 Bn by 2023.

For shopping and e-commerce, there were 907 issued patents and 1,162 published applications, indicating a number of patents are likely to issue in the coming 12 to 24 months.

The area of content streaming seems to be somewhat more less active, with 307 issued patents and just 240 published.

Disney’s patent on blockchain describes a content distribution system that helps fight piracy. The new blockchain system aims to stop theatrical releases from being leaked or reproduced without a license. (Source: technadu)

“The biggest gains in the percentage of overall blockchain patent filings over the last decade are represented by Japan and South Korea,” according to Kilpatrick Townsend.

“These gains may correspond to the export of American cryptocurrency and fintech applications into Asian markets as well as the continued expansion of Asian markets into fintech ventures.”