Bet you never thought that you would be reading about, let alone siding with, conservative political columnist Phyllis Schlafly and iconoclast prior art guru and newsletter writer Greg Aharonian in the same post.  Today you are. 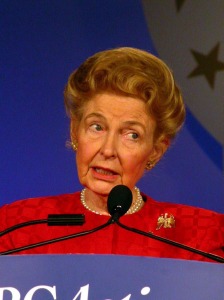 Both are adamantly opposed to the current patent reform bill and have written about  it recently. Schlafly’s March 8 column, Patent Reform is a Dead Giveaway, is a surprisingly good account of why the Bill is bad news for almost everyone, but especially American competitiveness.

Aharonian, a prototype IP blogger, infamous for having a bad word for almost everyone, was an early and outspoken proponent of patent quality.  He still emails his reports, Patent News, in Times Roman. His March 19 item  is entitled, “Patent Reform is Dead This Year — As It Should Be.” (In Washington where anything can happen, I am not quite so confident.)

Between Schlafly and Aharonian pretty much the entire breadth of the ideological spectrum is covered. It’s interesting how bad legislation can bring out the best in some people.