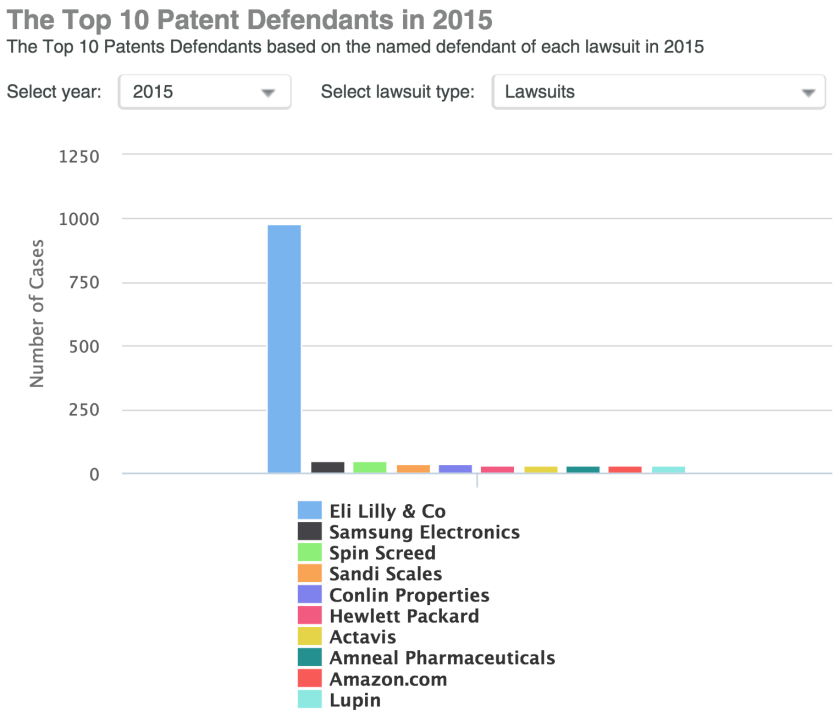 The size of businesses sued most frequently for patent infringement in 2016 were significantly larger than in 2015, when five little-known patent holders were among the top defendants. The amount of litigation also is much lower this year.

Pharmaceutical company Eli Lilly (341) is the top patent litigation defendant in 2016, with a ten-fold lead over number two Samsung (31). No doubt much of Lilly’s defense is the result of ANDA procedures brought by generic drug manufacturers against branded competitors to establish bio-equivalent drugs.

The rest of the list – Amazon, Actavis, AT&T Mobility I, Huawei Technologies, LG Electronics, AT&T, T Mobile USA and Motorola Mobility – all have 21 or fewer suits filed against them so far this year.

This represents a significant drop over last year, according to data supplied by Patexia.com.

Actavis, which acquired Allergan in 2014, is another diversified pharmaceutical company. Actavis is based in Dublin, Ireland, and is a subsidiary of Teva, an Israeli company. Five of the top ten defendants this year are foreign companies. Absent from the 2016 list is Apple and Google, which owns Motorola Mobility.

The rest of the top-ten defendants for 2015 had some less-known names, including: Spin Screed, Sandi Scales, Conlin Properties, Amneal Pharmaceuticals and Lupin Pharmaceuticals. Rounding out last year’s list was H-P, Actavis and Amazon. Only three companies, Samsung, H-P and Amazon, appear to be IT pure-plays.

The number of suits filed against Lilly last year was almost three times higher than 2016 to date, and those for companies in the two through ten spots were about two times higher.

The increase in litigation filings against more established patent holders may have to do with the greater likelihood of favorable settlement or payout of damages from them as opposed to smaller players.

It may also have to do with the changing economics of patent litigation which must anticipate the likelihood, time and costs associated with inter partes reviews.

For access to the top-ten patent litigation defendants and the number of suits filed against them from 2007-20016,  go here.