Some experts believe the US and China heading on a collision course, defined by mutually exclusive types of technology and IP and self-reliance.

Misuse has sewn the seeds of distrust between the Trump administration and Beijing in the area of IP and technology. If China’s best technology, such as Huawei’s 5G equipment, can not be trusted to provide reliable privacy, it does not matter how effective a solution it may offer. The U.S. will not buy and will pressure others not to. This, in turn, puts U.S. semiconductor manufacturers, like Micron, which supply Chinese businesses in an awkward position.

U.S. companies want to do business with Beijing, the world’s largest market for many products and services. The semiconductor market is a good an example of a U.S. industry that may be in decline because of both IP and trust issues.

The market for semiconductors in China is larger than the U.S., Japan, Europe and everywhere else combined. According to the most recent report from PWC, “China’s Impact on the Semiconductor Market,” China is challenging the U.S. for the semiconductor lead as demand as it attempts to fulfill growing local demand.

China’s semiconductor consumption market grew by 2.9% in 2016 to reach a new record of 60.6% of the global market while the worldwide semiconductor market only grew 1.1%. – PWC

Documents leaked by Edward Snowden in 2013 alleged that the National Security Agency could hack into telecom equipment made by both Huawei, which relied on American components, and Silicon Valley’s Cisco Systems Inc. That could have spurred Beijing to move Chinese companies away from U.S. dependence, reports The Wall Street Journal. 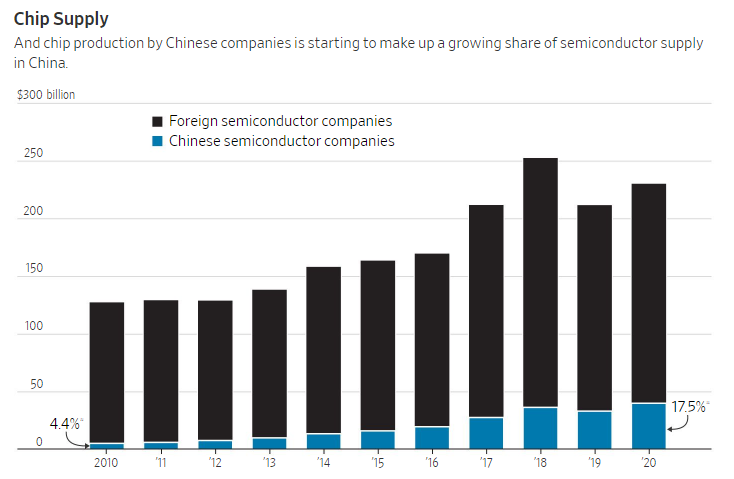 Enmeshed in the global supply chain, many American tech companies have opposed efforts to decouple the U.S. from China. Semiconductor manufacturers, in particular, have a lot to lose in the dust-up because China is both a manufacturing hub and a growing market for computers, smartphones and other electronics containing their chips.

The U.S. exported about $7 billion of chips to China in 2018, substantially more than it imported from China.