Companies and lawmakers who bash businesses that license patents got a dose of their own bitter medicine this week when their techniques were compared with those of fear-mongering, 1950s anti-communist demagogue Joe McCarthy.

“Villains of the new millennium” is how Jamie Siegel, an Acacia Research Group’s Senior Vice President, characterized the portrayal of non-practicing entities NPEs, also known as patent “trolls,” by those that stand to gain from their demise and who routinely disparage them in the press.

Speaking at the second annual Benchmark Litigation U.S. awards dinner in New York, Siegel was quoted in a story by reporter Michael Loney that appears in the Managing Intellectual Property blog as saying.

“[J]ust as McCarthyism sought to unfairly tag so many with the ‘red’ moniker, Congress, the press, many giant software companies, and even our president, today

seek to slap the moniker of ‘troll’ on attorneys and business people who are doing nothing more than monetising assets that they own – assets whose very existence is protected by Article 1 Section 8 of our Constitution.” Siegel joined California-based Acacia from Sony last year.

Siegel added that the hysteria around NPEs has been further inflamed by a lack of knowledge, including from the U.S. president. He said Barack Obama showed a lack of understanding when he issued executive directives to change the patent system. Contrary to public perception, he reminded the audience of lawyers, NPEs are good for innovation.

[Gene Quinn in IP Watchdog ran well-linked piece this week that took a deeper look at the sources of NPE-bashing, “Obama on Patents: The One-Sided USPTO Patent Ligation Beta.”]

In a separate but related development this week, Hon. Randall Rader, Chief Judge of the Court of Appeals for the Federal Circuit (CAFC) provided his strongest and most vocal defense of patent holders’ rights to date.

At a global IP conference in California Law.com reported that he said that  the problem of so-called patent trolls really boils down to a problem of excessive litigation costs. And it’s lawyers who are driving up those costs by spending millions on discovery in search of elusive “smoking-gun” documents.

“You yourselves should be going to your trial judges and requesting restrictions on discovery,” he added. “We cannot tolerate $3 million in discovery expense. 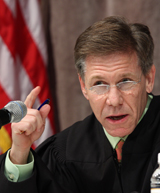 While chastising lawyers Judge Rader did not challenge their clients who can afford to pay the exorbitant legal bills and make it increasingly difficult for plaintiffs to file a legitimate complaint. No mention was made of the role recent legislation, which effectively forces holders of even the best patents to sue first to get the attention of an alleged infringer and prevent a declaratory judgement, and negotiate a license later.

“The problem isn’t the patent system. The problem isn’t even trolls,” Judge Rader said, and any effort to single them out will inevitably penalize universities, research clinics and other legitimate contributors to the U.S. innovation system.”

Doug Croxall, CEO of Marathon Patent Group (MARA), a patent licensing and management company, said that “the focus should be on patent quality not ownership. Many companies are unaccustomed to having good patents enforced by knowledgeable parties. We need to embrace good inventions, not fear them.”